Welcome to Save the Bees Australia

Become a Beekeeper to Bee the Cure

Select the tile below to buy now! 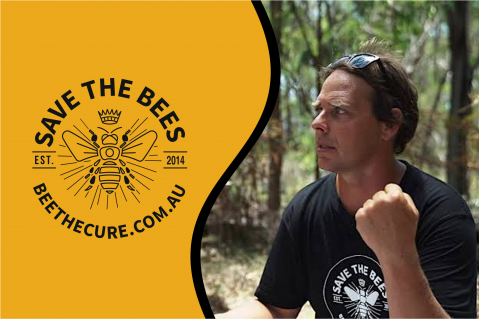 Why do this course?

What's in the course?

Why are global bee populations in trouble?

The state of beekeeping around the world is in calamity and close to a state of disaster. Colony collapse disorder* and Varroa mite** have hit every continent in the world except for Australia. We are in a privileged position here and if anything, we ought to have more stringent laws in terms of insecticide use and the transportation of bees and importation of honey and pollen. Australia is a major exporter of bees and by keeping our population healthy we have the potential to repopulate the world’s bees.

Wisdom and a holistic approach are required, where bees are honoured and respected as in Egyptian times. Bees do not respond well to greed. Moving them en masse long distances makes them more susceptible to disease. Logically, if Varroa mite were to arrive on Australian shores, it would be spread if it hit a large commercial operation that follows the blossom.

Bees are more than honey and its associated profit. They are the sun-lovers, pollen-matchmakers and community-driven workers. They are responsible for our food system and the planet as we know it. If bees thrive, humanity thrives.

Both our native bees and European honey bees are threatened by similar sources. Collective action must be taken to save both.

*Colony collapse disorder occurs when the majority of worker bees leave the hive, leaving behind their queen, amply honey supplies and immature bees. This is an abnormal occurrence for bees.
**Varroa mite is a parasite that enters the hive on the body of an incoming bee. It feeds on, weakens and kills colonies, transmitting a virus to the bees. The varroa mite can only reproduce in honeybee colonies.

How can beekeeping help to save the bees?

"The privilege of being a beekeeper is not to generate as much honey as possible. We keep bees so that we can contribute to pollination. Actually the future of beekeeping is not in one beekeeper with 60,000 hives, rather it is 60,000 people with one hive. All of them approaching the art and craft of being a keeper of bees as a holistic practice."

- Simon Buxton, ‘The Shamanic Way of the Bee’